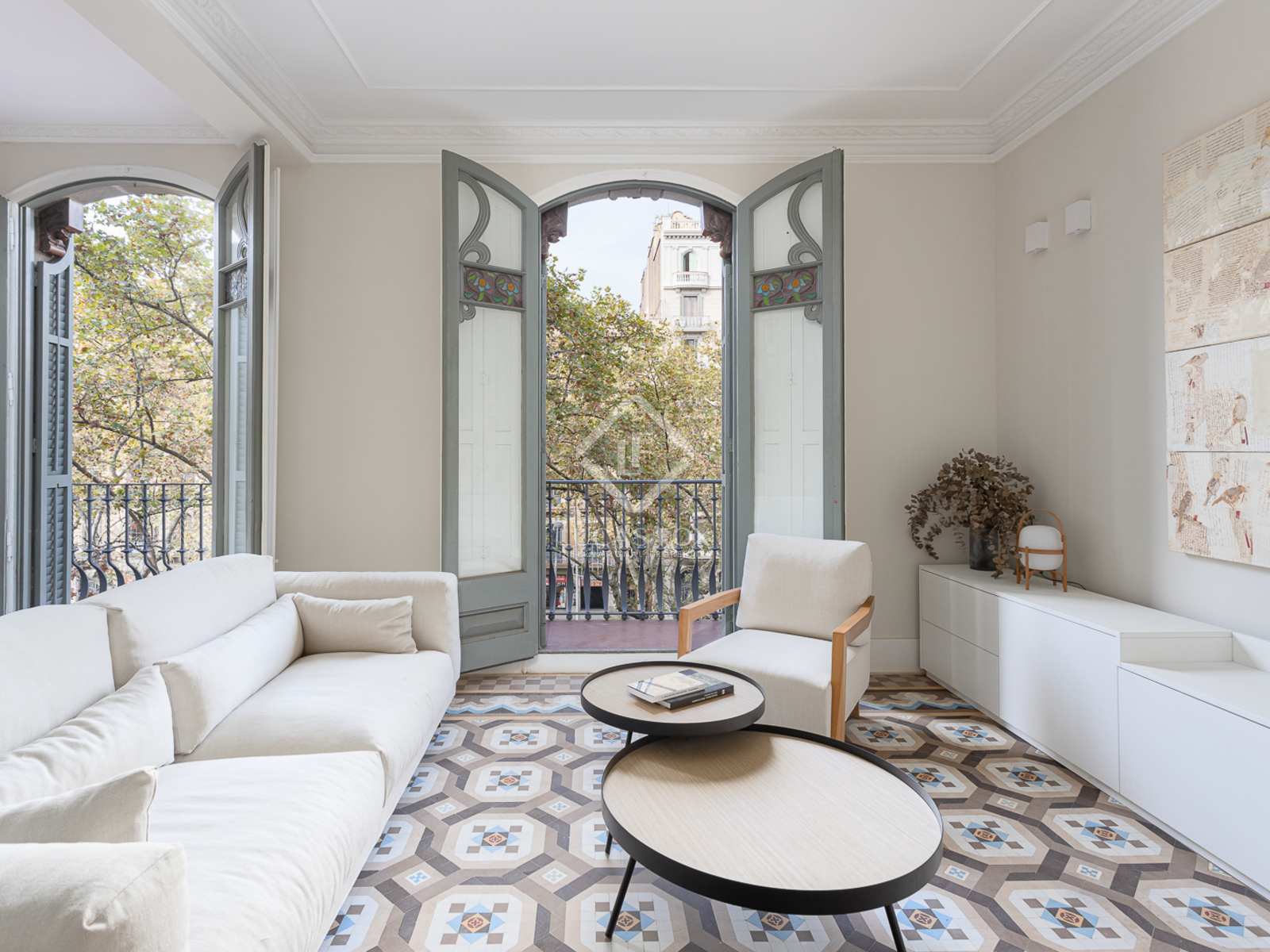 Lucas Fox is pleased to present Casa Oller, an incredible restored Modernista building in the heart of Barcelona's Eixample, on Gran Vía de les Corts Catalans, next to Passeig de Gràcia and close to other places of interest in Barcelona, such as the Sagrada Familia or Casa Batlló.

The building, the work of the architect Pau Salvat i Espasa, was built at the end of the 19th century, with all the characteristics of Catalan modernism. Today, it is presented renovated and with all period features intact, such as wrought iron motifs, stained-glass windows, carved wood, sgraffito and ceramics, among others. Upon entering, an incredible lobby, a central courtyard, a staircase and a lift are offered that reflect the architectural and historical value of the building. At the same time, it enjoys all the most exclusive 21st century amenities, such as a spa, sauna, gym and an outdoor pool with solarium.

The homes have been renovated with all kinds of details. On the one hand, the original mosaic floors, the stained-glass windows of the gallery and bay windows, the carpentry and the ceiling holdings have been recovered. At the same time, the homes enjoy a design that perfectly combines traditional elements with modern touches, such as open spaces, a cream colour scheme and modern furniture. Finally, they enjoy abundant natural light, thanks to their dual aspect windows that also provide cross ventilation, with balconies with large windows on one side and a gallery on the other.

In terms of features, it has the best finishes, such as restored mosaic floors, laminate parquet floors, radiator heating, ducted air conditioning and an aerothermal system for air conditioning and the production of domestic hot water. The bathrooms and kitchens are renovated and fully equipped.

Get in touch for more information.

This development is located in the Quadrat d'Or, an exclusive location in Barcelona's Eixample that houses all kinds of Catalan modernist architectural works, from Casa Batlló and La Pedrera, to the Sagrada Familia, among others. The building is located on the Gran Vía de les Corts Catalans, a short distance from Passeig de Gràcia and close to the Ciutat Vella.

The Eixample has many cultural and leisure options, with shops, art galleries, museums, restaurants and trendy entertainment venues.

The area has excellent transport links with the rest of the city, either by public transport or by car, in an area with wide, leafy avenues.

Units in this development

Our experienced sales agents are on hand to help you find out more about this exciting development.