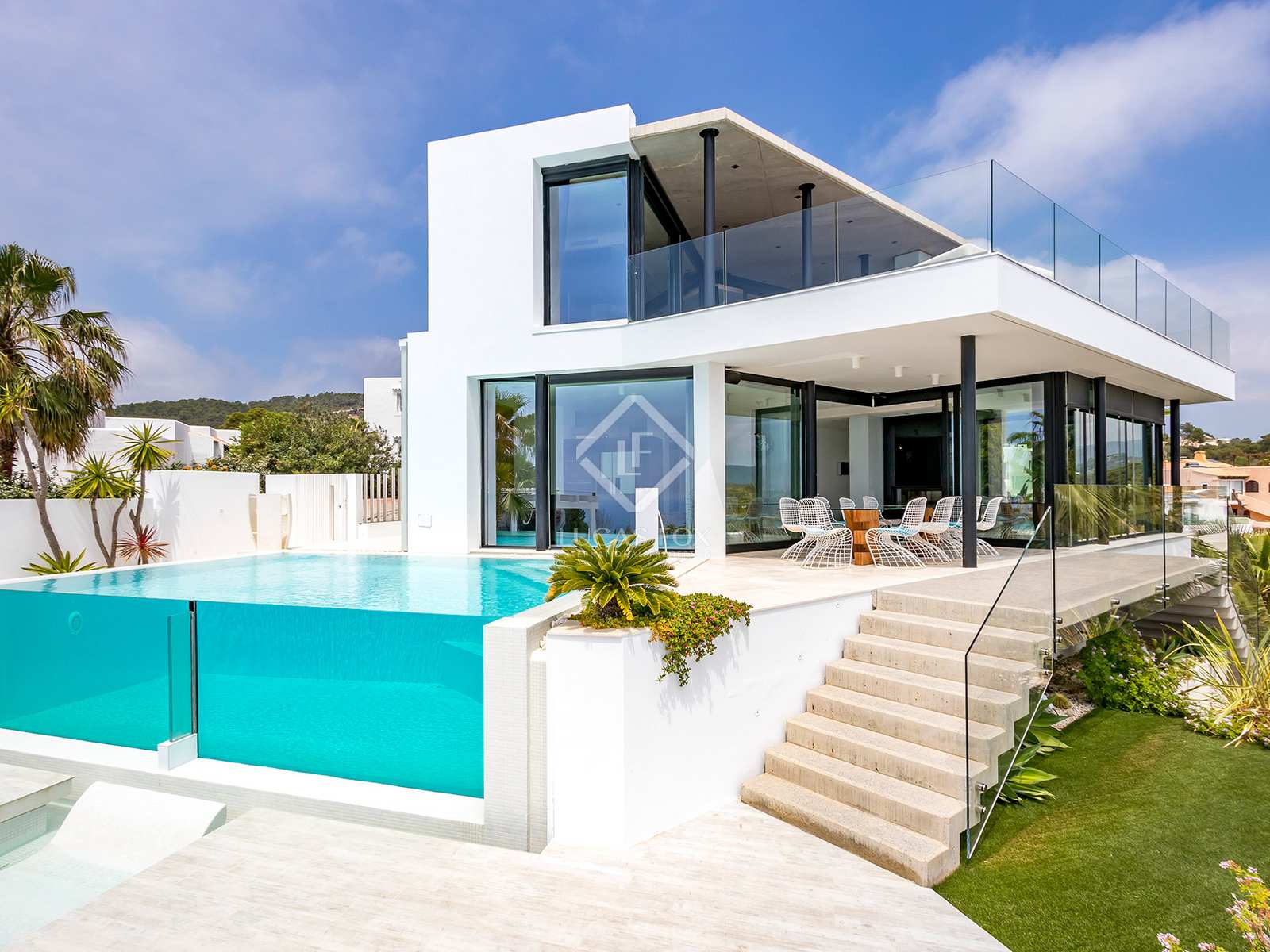 This magnificent designer villa is located in an exclusive gated residential area in the south west coast of Ibiza, near to San Jose, Es Cubells and Cala Jondal. Stunning sea views and 24/7 security.

This stunning brand new property for sale in San José is situated in the exclusive private urbanization of Vista Alegre in the sought-after area of south-west Ibiza. The urbanization has 24/7 security all year round.

The property comprises of 3 bedrooms, all of which are ensuite, 4 bathrooms, state-of-the-art modern kitchen, large living/dining area, terraces, lounge area and external dining area/kitchen and BBQ area. Large pool. There is also the option of building a fourth bedroom.

It boasts stunning views of the sea and Porroig.

The house was built using very high quality materials. It is flooded with natural light as it is surrounded by windows (thermic proof quality).

Vista alegre is next to San Jose Village, Cala Jondal and Es Cubells.

THIS PROPERTY MUST BE SEEN!

Breathtaking views of the sea, Formentera and Porroig

Possibility of building a fourth bedroom

The villa has been constructed over 2 levels

15 minutes to airport and Ibiza town

San José (Sant Josep in Catalan) is the largest municipality in Ibiza and is ocated in the south of Ibiza. It  includes some of the most emblematic sights of the island as well as some beautiful beaches and stunning scenery. Aside from the town of San José, the municipality includes the parishes of Sant Jordi, Sant Agustí and es Cubells, all of them quiet picturesque villages with beautiful churches. The area has become increasingly popular with property buyers due to its beautiful beaches and stunning countryside.

The charming town of San José on the Sa Talaia, Ibiza's tallest mountain  in the centre of the municipality and is dominated by an 18th Century church. It also boasts some excellent restaurants serving traditional Ibicencan cuisine, tapas and seafood, designer and traditional shops and  a few bars . The pretty whitewashed village is far removed from the world famous party scene hot spots that much of Ibiza is famous for. And has become a popular hub among northern Europeans who have made this part of Ibiza their home.

The Salines Nature park is one of the most visited nature reserves in Spain and includes the south tip of Ibiza (within the San José municipality), the north of Formentera and the islets which separate the islands. The area is dominated by salt pans and marshes, designated a Natural Reserve in 1995 and Natural Park in 2001 In former times, Ibiza was called the island of salt, and its inhabitants were even guaranteed a supply of the condiment by law. After the re-conquest of Spain by the Moors, the salt pans became one of the most important saltworks in the Mediterranean. For various centuries they belonged to the Crown, until they passed into private hands in the late 19th Century.  Today the extraction of salt continues, using traditional methods and creating a landscape of white mountains.
The sea beds have been declared a World Heritage Site by UNESCO and are an ideal place for scuba-diving.

The municipality’s coastline is 80 Km long boasts some of the most beautiful coves on the island, such as Cavallet, Cala Jondal, Cala d’Hort, Cala Carbó, Cala Vedella, Cala Tarida, and Platges de Comte, as well as remote fishermen bays, such as Porroig, es Xarco, sa Caleta, Cala Llentrisca, and Cala Corral, all of them keeping their traditional feel.
The coastline is abundant with cliffs and islets, such as Vedrà, es Vedranell, sa Conillera, s’Espartà, s’Illa des Bosc, and ses Bledes, which dominate the view.

Located in the heart of the municipality is Sa Talaia is the highest woodland in the island at 475 m high and offers one of the best views in the island. There are also important archaeological sites such as Sa Caleta’s Phoenician village founded by the first settlers in the island and a World Heritage site, as well as Ses Païses de Cala d’Hort, a Punic-Roman settlement

In accordance with government guidelines, Lucas Fox Property Lounges are now open. We are also carrying out some viewings to our listed properties.