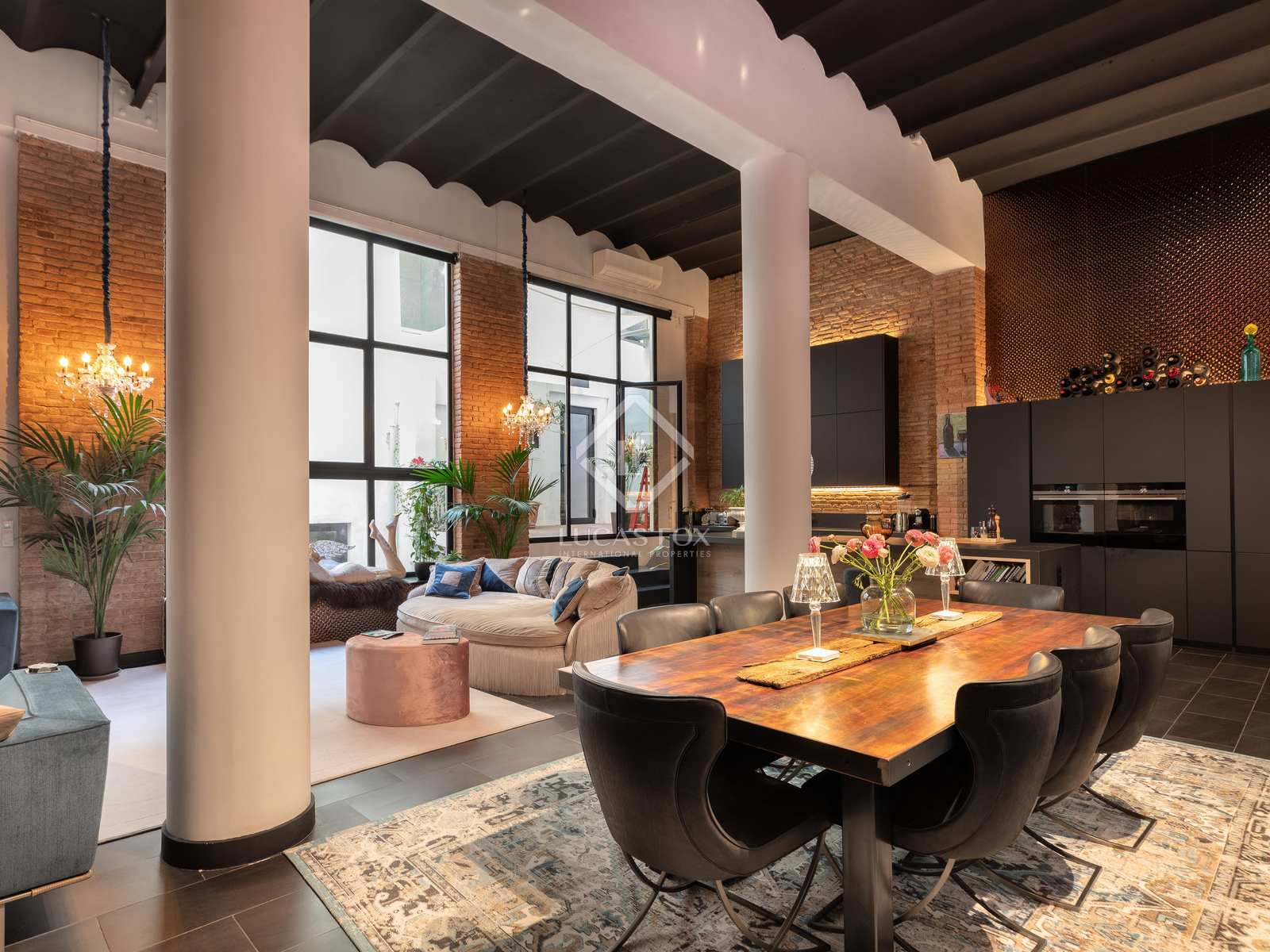 Loft-style apartment with a spectacular design by a famous architect for sale in a characteristic modernist building from 1926 in Barcelona.

The apartment, which once housed a deli and a car parts dealer, covers the entire ground ﬂoor. It also has a large basement and an outbuilding accessible via a private patio. Altogether, this loft oﬀers a surface area of no less than 500 square metres.

It is hard not to fall in love with this loft as soon as you open the front door. The daring blend of luxury mod cons in a Hollywood Regency-style setting combined with a post-industrial touch makes the interior even more unique and impressive than it already is. Light and space have been brilliantly utilized; the large windows oﬀering a view of the patio give the living room and open kitchen an incredible sense of spaciousness, and this is amplified by the slender white pillars supporting the 5-meter-high ceiling.

Features which remind us of the loft's industrial past, such as the unplastered brick walls and the vaulted ceiling, form a stylish contrast with the clean and simple lines of the black kitchen. That of course boasts a kitchen island with all the high-end appliances and a granite countertop which also doubles as breakfast bar. A wide hall leads from the kitchen to the entrance hall and the guest wing, which has its own kitchen unit and a mezzanine ﬂoor with bedroom and bathroom.

With its many artworks, artistically- ﬁnished furniture and often tastefully-quirky accessories, the entire loft emanates an exceptional sense of the bohemian. A must-see is the eggshell blue dining room with its white corniced ceiling. The loft also has plenty of modern comfort: underﬂoor heating and air conditioning throughout, automatic awnings on the large windows in the living room, an advanced video security and alarm system: it is all there.

But the former storage areas down the inner stairs to the basement, perhaps oﬀer the greatest surprise: the master bedroom. The space here feels almost limitless: a bedroom measuring 157 square metres, not counting another 30 on the patio outside. With its typically Catalan terracotta-tiled vaulted ceiling and walls of classic, hand-made bricks, giving this area an aura of romance. The modern king-size bed with its blue velvet headend gives that royal feeling. The same applies to the free-standing bathtub with its eye-catching brass tap and hand shower (of which a diﬀerent version can be found in the double walk-in shower against the side wall). The basement also has two toilets and a generous walk-in closet, presently housing a home cinema, measuring no less than 40 square metres.

An intimate terrace links the open kitchen with an outbuilding across the patio. This wing, which has its own bathroom and toilet, is being used as an oﬃce and studio, but it has a bedroom on the mezzanine ﬂoor. This area can be easily accessed from outside.

The loft is in a low-traﬃc area on the edge of the Eixample Right, The many restaurants and bars give the neighbourhood a vibrant bustle, as does the beautifully-renovated market hall on the square behind the house. An easy stroll will take you to one of Barcelona's most beautiful beaches, while the metro will whisk you to the old inner city, the main station and the city's international airport.