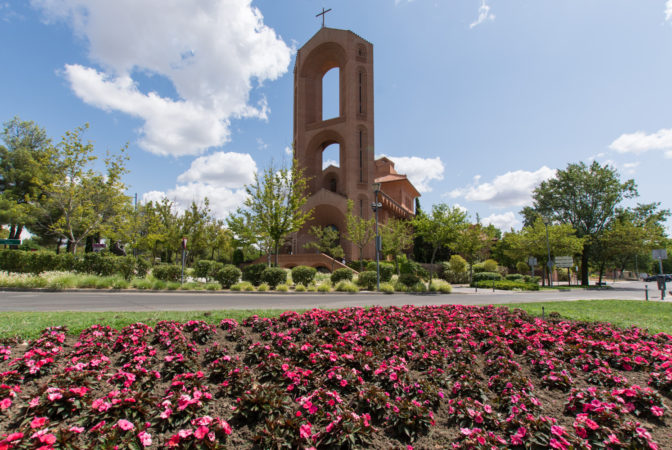 When we think about the best places to live in Madrid, we generally think of the city centre. The tree-lined promenades of Madrid, trendy bars, giant squares, the bullfighting rings humming with history… it all takes place in the middle.

But there’s so much going on in the suburbs, too. Baroque plazas with quirky bars beneath the arches. Sleepy old restaurants, lounging in their sun-bleached majesty. Hidden treasures everywhere, just waiting to be opened up.

And few of these treasures are as bountiful as Pozuelo and its neighbouring village, Aravaca. This twin community is only a few minutes from Madrid but is proudly self-contained, buzzing with attractions for international families.

Pozuelo and Aravaca were once a single city. But then they separated, although no-one’s quite sure why.

Pozuelo remains a city in its own right, while Aravaca is perched on its shoulder, still under the banner of Madrid. In reality, however, the two entities (and Valdemarín, a tiny hamlet on the fringe of Aravaca) remain one big community: even if you ask some local residents, they’re not sure which one they belong to.

Madrid is only 20 minutes away by car, and there’s a train which gets there in just seven minutes. As the Spanish capital has blossomed into a global powerhouse, Pozuelo has become a booming commuter hub. Together with Aravaca, it now has a population of over 100,000 people, boasting both the highest average income and the lowest unemployment in all of Spain.

Long before all this prosperity, Pozuelo and its neighbours served as a place for Madrileño people to escape during the summer, and you can still see this history in the charming old houses and chalets dotted around the place. However, the community has been remodelled in recent years and is now defined by shimmering, purpose-built properties, many of them equipped with swimming pools and 24-hour gated security.

We’ll show you some of our favourite properties later, but first, let’s talk about the essential stuff: the amenities. If you’re planning to invest in an overseas property don’t miss our Market Report, this is the stuff you need to know, right?

Schools and amenities in Pozuelo & Aravaca

It’s no exaggeration to say that Madrid is powered by Pozuelo. Some of the capital’s brightest people live here, drawn from all over the world. So it’s hardly surprising that the area boasts some of the best international schools in Spain.

British, American, French and German schools can all be found either in Pozuelo or within easy reach. Fees can vary, but they’re generally cheaper than sending your kids to a private school in the UK. Some schools teach towards the ESO, Spain’s national secondary school exams, but you can also find schools that work towards GCSEs and A-levels.

Even without all those schools on the doorstep, this is a great place to raise kids. For one thing, it’s extremely safe, with one of the lowest crime rates in all of Spain; for another, it’s bursting with green spaces where children can run, roam and cycle their hearts out.

During the development of Pozuelo and Aravaca in recent years, planners have strived to retain the leafy, rural charm which once drew people from Madrid during the summer months. Sprinkled among all the uber-modern residential developments, they have left a network of parks full of tracks, trails and playgrounds. 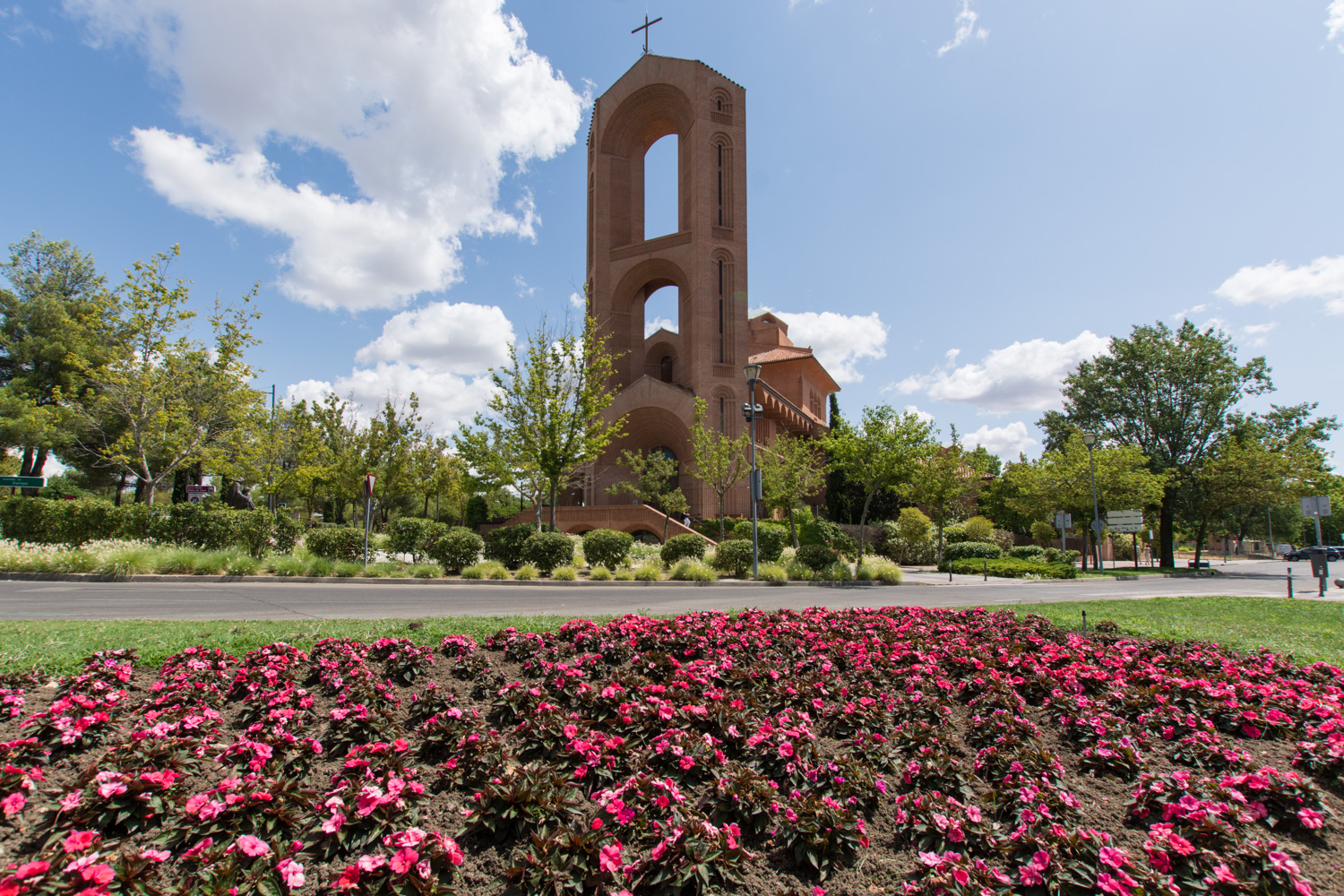 The biggest of these spaces is the sprawling Adolfo Suarez Park, which provides a lush gateway to Madrid. If you fancy a leisurely route into the capital, you can walk or cycle across this vast green oasis. Alternatively, you can pound the many trails that criss-cross the park to get fit (or get even fitter!)

These outdoor pursuits are a fulcrum of Spanish life, actually. Spain is known for being the healthiest country in the world, and that’s not only down to its Mediterranean diet; every weekend millions of people take part in marathons, triathlons and mountain runs.

But Pozuelo really takes this to the max. As well as all those lovely trail runs you can enjoy in the early evening sunshine, there is a network of gyms to serve the local population, including the swanky Reebok Sports Club, a true community which offers everything from high-intensity crossfit workouts and triathlon groups to hairdressing and hydrotherapy. There are several yoga and pilates studios nearby, too.

Football is a bedrock of the local community. In fact, Pozuelo has its own team, competing in Spain’s third division, with thriving sections for boys and girls. Numerous other clubs have taken root in the area too, so you and your little ones will never be short of places to play the beautiful game.

And before we finish our whistle-stop sporting tour, it would be remiss not to mention the golf resorts. Our favourite is the course at Somosaguas, which is only a 10-minute drive from the centre of Pozuelo. This breezy 9-hole course, given natural shade by a boulevard of pine trees, also has its own academy.

Ok, so now we’ve worked up a sweat, how about a bit of downtime?

Well the museums and shopping precincts of Madrid are just around the corner (you can be at the world-famous Prado museum in less than half an hour) but there’s heaps going on in Pozuelo itself, too.

The beautiful Avenida de Europa serves as the central nucleus of life round here, one of those tree-lined paseos that are so perfectly, effortlessly Spain. This long, arcing street is lined by bars and restaurants, although one of our favourites is actually just off the main thoroughfare, a little art-deco joint called Lateral; the outdoor terrace is one of the trendiest places in Pozuelo and a beacon for after-workers, washing down the stresses of the day with a beer and some tapas.

If you fancy something a bit more formal and don’t mind a walk, it’s also a good idea to check out El Pimiento Verde (the green pepper) in neighbouring Majadahonda. If you end up in this classy little eatery, try the monkfish. You can thank us later.

And if you’re up for a bit of retail therapy, Zielo offers one of the most glamorous centro comerciales (shopping centres) in the area. Zara, Massimo Dutti, Calzedonia… they’re all here, and British shoppers will find plenty of old favourites like Game and the Body Shop too.

Once you’re done exploring Zielo, head over into central Madrid, and you’ll find world-class brands like Chanel, Dior and Gucci.

Ok, we promised to show you some properties, right? Well Lucas Fox has listings across Pozuelo, Aravaca, Boadilla del Monte, Monteclaro and Valdemarín, and here’s a selection of some of our faves to whet your appetite.

First, there’s this amazing duplex penthouse with a rooftop solarium in Avenida de Europa, one of the best areas of Pozuelo, but also well-connected, with a private pool and wonderful unobstructed views that make this place the perfect place to meet friends. 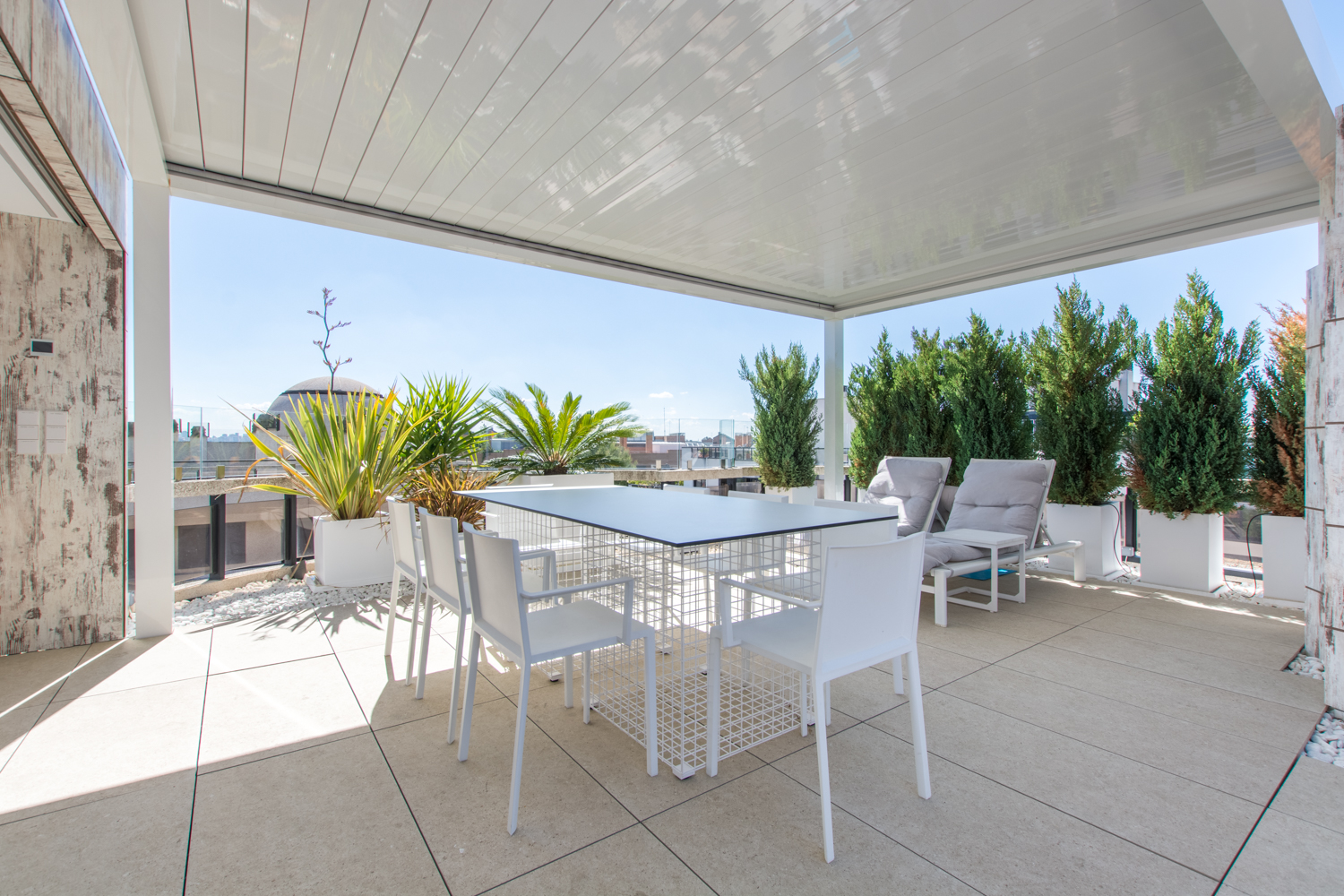 If you’re looking for something a bit more truly unique, check out this seven-bed villa in Somosaguas, Pozuelo, designed and built by the current owners, this is the perfect family home with wonderful entertainment and living spaces in a secure and exclusive area of Somosaguas. 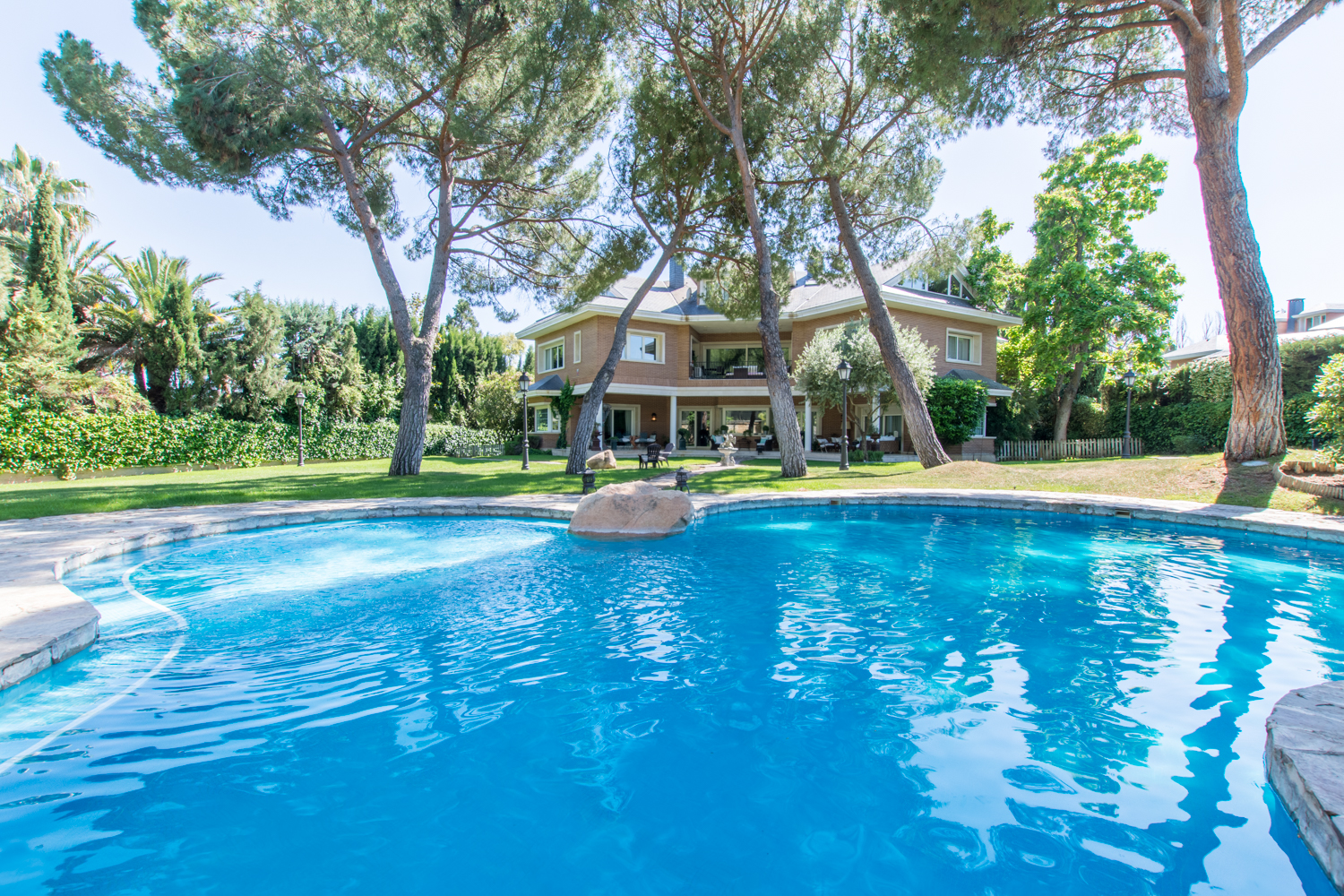 Finally, we’ve got to show you this 8-bedroom pile in Somosaguas, complete with its own Italianate garden and bodega. There’s also a tennis court, so whether you want to burn some calories or enjoy a well-earned glass of Rioja, you’ve got it all here. 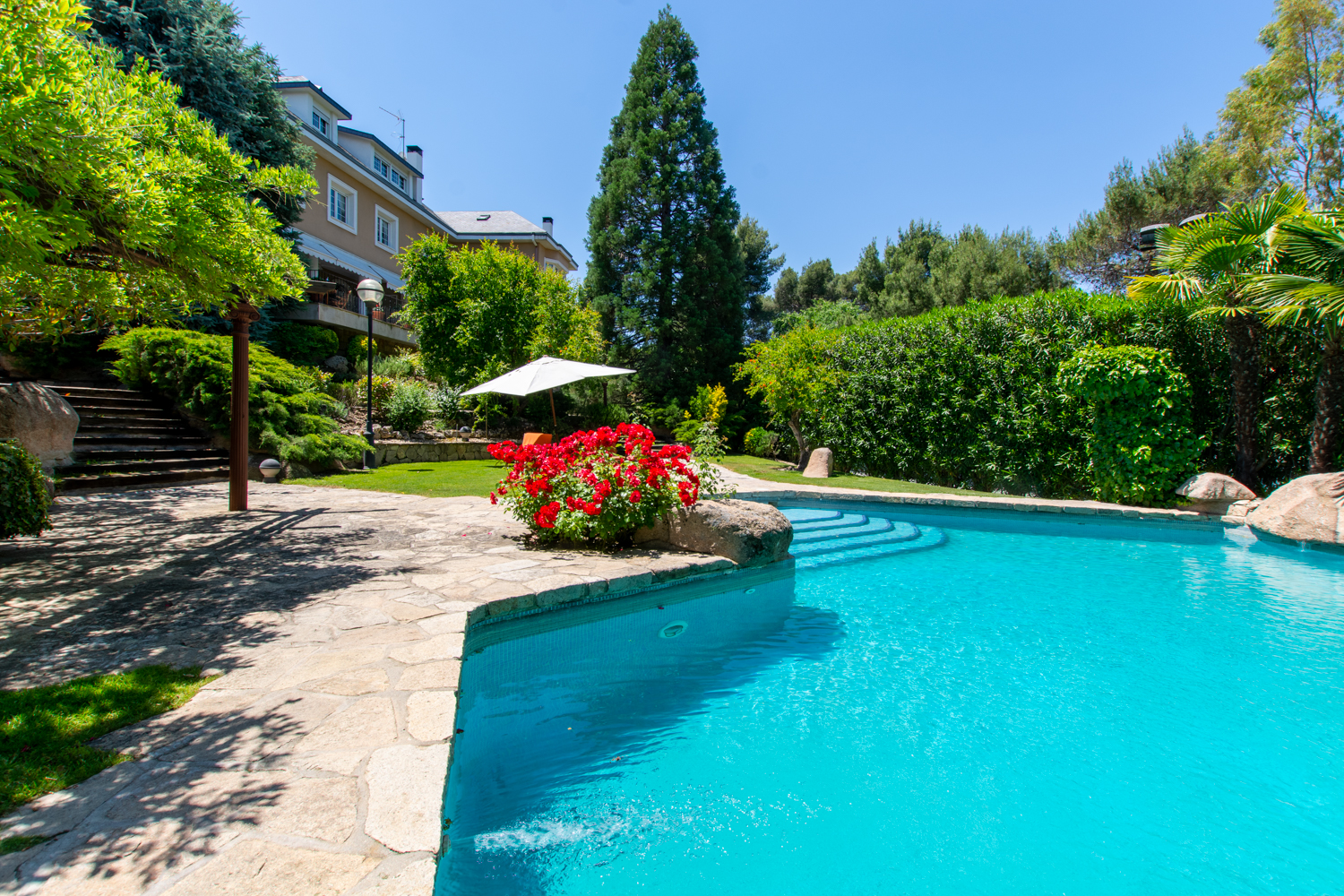 If you’ve got a big, active family, then this amazing property has it all… even a sports court!

And if you want more information, you know where to find us: www.lucasfox.com

Take a look at a selection of properties at Lucas Fox Pozuelo.