The bustling town of Lloret de Mar is located on the southern end of the beautiful Costa Brava coastline in Spain’s Catalonia region, between the resorts of Tossa de Mar and Blanes. It is just 40km from Girona and its international airport and 75km from Barcelona.

The town is popular with both international tourists and property buyers, largely due to the surrounding area’s natural beauty and exceptional beaches, which offer crystalline shallow waters – many of which have been awarded with the Blue Flag certification. The area is also home to the PGA Catalunya Resort, Spain’s No.1 ranked golf course and one of Europe’s most prestigious new golf resorts.

The region is increasingly popular with visitors as is shown by the latest official data from Spain’s National Institute of Statistics, who registered a rise of 0.8% in international tourism in Catalonia in 2019 over the same period in 2018, with the region hosting almost 19.4 million visitors throughout the year. According to Aena, the number of passengers arriving at Girona airport in 2019 was just over 1.9 million.

The number of sales transactions of new homes in the first nine months of 2019, however, showed a decrease, of 5%, when compared to the same period in 2018. It is also below the number of sales registered in the same period in 2014, down by 14%, and is still significantly below (94%) the number registered in the first nine months of 2007.

“Situated in the southern end of the Costa Brava, Lloret de Mar’s relative proximity to Barcelona makes it an attractive option for second home buyers looking for beach homes within an hour of the city. Its proximity to the historic city of Girona and its international airport, the PGA de Catalunya golf resort and Blanes marina – the most southerly marina of the Costa Brava coastline – are also a major draw for buyers,” states Tom Maidment, Partner Lucas Fox Costa Brava.

“Lloret is a lively town with year-round life which also makes it attractive for both international and national buyers seeking a primary residence on the Costa Brava.” 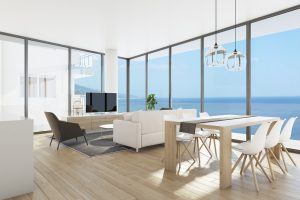