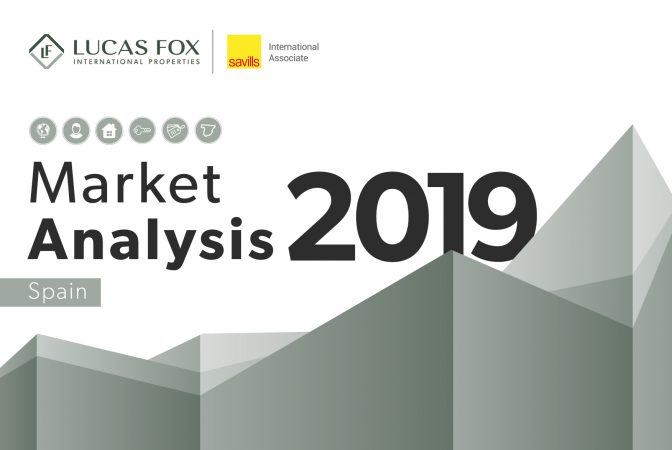 After two general elections in nine months, Spain now has its first ever coalition Government, made up of the Socialist Party (PSOE), headed up by Pedro Sánchez, and Unidas Podemos with its leader Pablo Iglesias. The new coalition will hopefully bring some level of stability after a fairly turbulent year politically and will be addressing political, territorial and social dimensions, which could be challenging but could see some positive outcomes.

More than three and a half years after the referendum, the UK has finally left the EU but they still have to decide on a trade deal, among a myriad of other issues. The interim agreement period ends on 31 December 2020, by which time Spanish citizens in the UK and UK citizens in Spain should know where they stand. Spain has always reiterated that it will mirror any new regulations offered by the UK, which are, as yet, unknown. Since the overwhelming UK election victory by the Conservative party in December 2019, the Pound has strengthened against the Euro (1 Pound is currently around 1.18 Euros), which should help motivate British buyers during 2020.

Interest rates continue to be extremely low and therefore make borrowing very attractive. Via some lenders fixed rate mortgages start at 1.55% and variable rates at 1.15% below Euribor.

Spain is on track for a record year of tourist arrivals for the seventh year in succession. Data from November 2019 shows that the number of foreign tourists was up by 2.8% year-on-year to 4.7 million. The main increases were registered in visitors from France (up by 21%), the Netherlands (up by 11%) and Ireland (also up by 11%), according to Spain’s National Institute of Statistics (INE).

Lucas Fox had another positive year in 2019 with both the volume and value of its sales increasing significantly. The number of property transactions across the group (currently 24 offices) increased by 48% and the value of sales by 57%, when compared to 2018. 32% of the total sales were for new homes. The average property price also rose, from €869,417 to €923,256, an increase of 6%.

The areas that registered the most significant increases were Barcelona, where sales rose by 78%, and the Catalan coastal town of Sitges, where there were nearly two and half times more sales in 2019 than in 2018. New offices opened in Girona, Pozuelo, Platja d’Aro and Sant Cugat del Vallès during 2019, adding to the seven new offices in 2018 (Alicante, Andorra, Málaga, Menorca, Tarragona, Vigo and Vilanova i la Geltrú,) where total sales more than tripled year-on-year.

Sales of homes valued over €900,000 increased by 30% across the group, with an average price of just over €2 million, an increase of 21% when compared to the average prime property price sold in 2018. The areas that registered the greatest increases in prime sales were Barcelona (50% increase), Madrid (30% increase) and Sitges (33% increase).

Looking at the buyer profile across the group, 58% of buyers came from outside Spain, down from 66% in 2018, with 42% coming from Spain. The motivation continues to be split fairly evenly between purchasing as a primary residence (33%), a second home (30%) and as an investment property (30%) with 6% buying to obtain the residency Golden Visa. 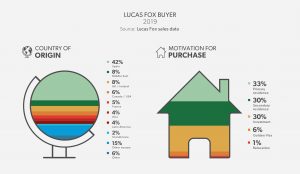 With regards to prime buyers (those purchasing property over €900,000) 60% of buyers come from outside Spain. International buyers account for a slightly larger proportion of buyers when looking at sales of new homes (67%). 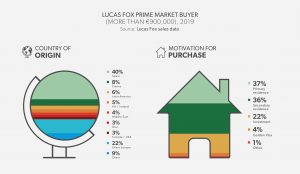 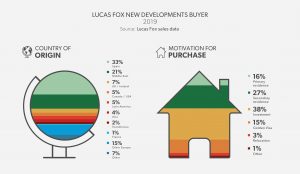 Average sales prices across Spain increased by 4.6% year-on-year, when comparing prices from December 2018 to December 2019, according to the property portal Idealista. Prices have grown by almost 13% since December 2014, around the time when they had bottomed out across the country but are still just under 13% below those in December 2007 when prices were at their peak, suggesting there is still some margin for growth. The provinces that registered some of the most significant price rises were Málaga Province (8.5%), the Balearic Islands (6.6%) and Girona Province (5.2%). Prices in Valencia Province increased by 3.5%, in the Community of Madrid by 3.3% and in Barcelona Province by 3.2%. Prices in Madrid City saw an increase of 1.3% (€3,732 per square metre) and in Valencia City an increase of 3.1% (€1,779 per square metre). However, after 5 years of price rises, property prices in the city of Barcelona are stablising. In 2019 they showed a drop of 2.5%, with prices averaging at €4,115 per square metre in December 2019.

Both Madrid City and Barcelona City have now surpassed the prices registered in December 2007 – by 6.8% and 1.1% respectively. Valencia City prices are still 24.6% below what they were in December 2007. 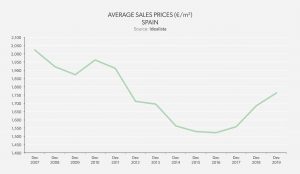 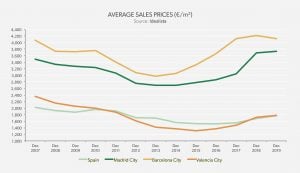 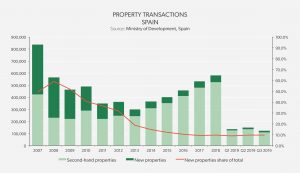 The number of sales transactions in Spain’s key cities in the first nine months of 2019 followed the same pattern as in the provinces, seeing annual drops of 13.9% in Valencia and 10.7 % in Madrid. The decrease was much less pronounced in Barcelona where sales fell only by just over 1% when compared to the same period in 2018. Sales of new homes, however, registered an increase across the country as a whole, of 1.2%. One of the biggest increases was in Valencia where the sales of new homes in the first nine months of 2019 almost tripled compared to the same period in 2018, increasing from 184 to 534. In Madrid new homes sales rose by 5.9% but they decreased by 10.3% in Barcelona. 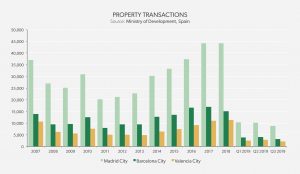 Note the following figures are provisional: