Leading luxury real estate agency Lucas Fox has teamed up with the Barcelona-based charity Furnish A Future (FaF) that helps support refugees, asylum seekers and those who have been forced to flee their homes.

The initiative accepts gently used furniture from international families and donates it to displaced families and individuals seeking to establish a new life in the Catalan capital.

FaF falls under the umbrella of The American School of Barcelona’s RefugART programme and works alongside the international school community as many foreign families stay in the city temporarily, leaving behind furniture when they leave. FaF currently collaborates with NGOs Accem, CEAR and Open Cultural Center.

“The parallel between many families in international schools and refugee families are the challenges that must be faced when establishing life in a new country but the similarities end there,” explains founder of FaF, Lisa Mougin. “Families at international schools typically have moved voluntarily and possess the financial means to secure a safe life. Displaced families have been forced to flee their homes due to war, natural or human made disasters and other such situations that threaten their livelihood.  The Furnish a Future project is operated by dedicated volunteers but requires funding to reach its fullest potential. We are deeply grateful for the generosity of Lucas Fox in donating money to help us continue our operations, which have had a meaningful impact on a multitude of refugee families in Barcelona.”

Lucas Fox’s sponsorship of the project will cover the vital need for transport to collect items, climate-controlled storage space and marketing campaigns to help bring more awareness to the initiative. FaF currently have organised ‘pick up’ days at the end of the school year in June, when many international families tend to leave Barcelona, but can also collect donated furniture throughout the year on a per-request basis.

“Lucas Fox is keen to strengthen its role of social responsibility in Spain, particularly in Barcelona, a city that has enhanced the lives of so many of our staff and clients since the company was founded in 2005,” comments Lucas Fox partner Tom Maidment. “We are aware that it can be as rewarding to make a difference as to make a profit, and this a theme we aim to build on thanks to this exciting new partnership.” 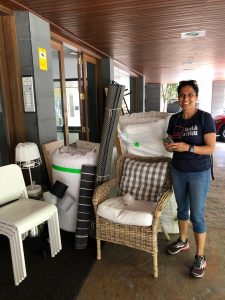 Teja Rau of Furnish a Future collecting furniture for displaced families in BarcelonaThose who would like to donate furniture can simply submit a donation form.

Anyone can donate, as long as the items are in good condition. Beds, sofas, chairs, desks and cots are particularly needed.