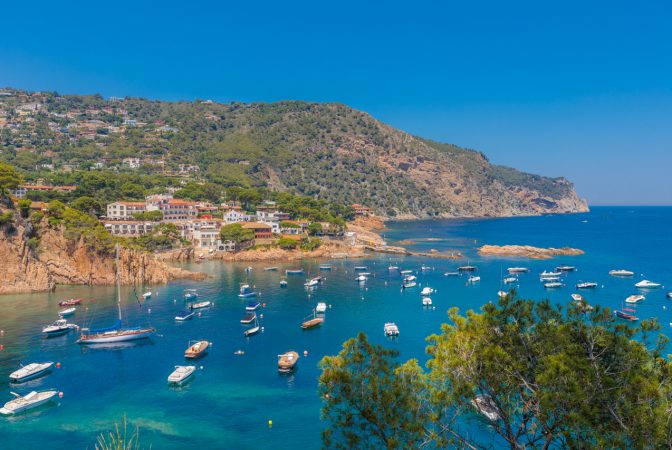 Lucas Fox’s Costa Brava office has sold more than €35 million worth of property in the first three quarters of 2019, including the two largest residential transactions by any real estate agency to be recorded in the region this year.

Following the sale of a large seafront property in Platja d’Aro and a luxury first line villa in Aiguablava – with a combined value of €15.7million – Lucas Fox has claimed 100% of the uber prime (above €7 million) market in the Costa Brava.

“2019 has been an exceptional year for Lucas Fox in the Costa Brava and our Q3 results were the best quarterly figures we have ever recorded,” comments partner Tom Maidment. “The area has become a magnet for buyers looking for exclusive homes in recent years thanks to its exceptional beauty, magnificent coastline and proximity to Girona and Barcelona. We’ve also seen more interesting properties come onto the market – from historical country estates to sleek designer coastal villas, which are attracting a more discerning buyer. These two major transactions are also testament to the strength of the Lucas Fox brand and the specialist market knowledge of our international commercial team.”

In the third quarter of 2019, the Lucas Fox Costa Brava office has seen the average price of a sale increase by 28% to €1.6 million. 37% of the buyers were local, 37% were Northern European with the rest split between Russia, the United States and Central America. 58% of buyers purchased second homes, 21% of buyers purchased as a primary residence and 16% for investment purposes.

A London-based Russian businessmen purchased the Platja d’Aro property for use as a holiday home. “I’ve always considered the Costa Brava to be one of the Mediterranean’s hidden gems,” he explains. “The area has everything – a wonderful climate, a rich culture, beautiful architecture, history, great cuisine, stunning beaches, numerous sports and activities, and so much more besides.”

A French company director is the new owner of the Aiguablava villa, who also purchased for use as a second residence. French clients represent an increasing proportion of Lucas Fox’s Costa Brava business (currently around 16% of buyers) particularly in the coastal areas around Begur and Palafrugell. “The proximity from Toulouse, Montpellier and surrounding areas makes the Costa Brava an attractive option for high-end French buyers looking for weekend and summer homes and a more low-key and affordable alternative to the Côte d’Azur and other coastal areas of the south of France,” comments Maidment. “The high-speed rail link to Girona also makes the Costa Brava accessible and attractive to Parisian clients, many of whom look for holiday homes in the area with rental investment potential.”

Since the office was established in 2007, the Lucas Fox Costa Brava office has gained an increasingly dominant position in the prime market, particularly in the most sought-after areas of the Baix Empordà coastline, which includes desirable coastal towns such as Calella de Palafrugell and Llafranc. According to data in the Spanish Land Registry, since 2016 Lucas Fox has accounted for 50% of all prime property sales (above €950,000) in these two exclusive seaside locations. 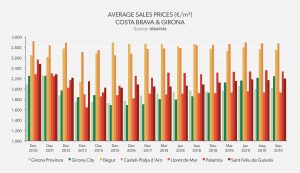 Sales prices in Girona Province reached €2,020 per square metre by September 2019, an annual increase of 2.8% and a rise of just over 15% in 5 years, according to Idealista. However prices are still around 9% below the peak of 2007 and also just under 25% lower than the current average price in Barcelona Province (€2,693 per square metre). Looking specifically at the area of Begur, prices currently average at €2,744 per square metre, up by just over 28% compared to their lowest price point in recent years of €2,137 per square metre in December 2013.