Sales of new homes by Spanish leading luxury real estate agency Lucas Fox in the period from January to April 2019 have more than tripled compared to the same period last year.

The upsurge in new homes transactions is largely due to a significant increase in sales by Lucas Fox’s Barcelona office with the number of transactions completed during the first 4 months of 2019 almost 8 times more than in the same period in 2018. This is mainly down to the fact that a number of projects that were in the construction phase during 2017 and 2018 have now been completed.

The average price of a new home sold by Lucas Fox rose from €868,909 during January to April 2018 to €1,068,992 in the same period this year, up by 23%. In Barcelona, the products that have been most in demand are located in desirable districts such as Eixample and Diagonal Mar with New Developments Gran Via 604 and Diagonal Port accounting for the majority of new homes sales. Paseo de San Juan 74 in Eixample Right is currently attracting a lot of attention among both national and international buyers.

“It’s been an excellent start to 2019 for the Lucas Fox new homes division,” comments Joanna Papis, Head of New Developments. “Scores of sales in Barcelona that had been in the ‘offer’ stage were completed in the year’s first quarter and regions such as Girona, Sitges and Marbella will also see a good end to the year where many deals will finally be signed off. We are currently commercialising around €1 billion worth of New Development product across Spain.” 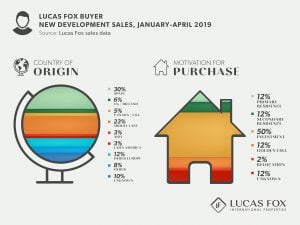 Nationality-wise, there has been a major surge in the numbers of buyers from the Middle East and the United States, who tend to prefer contemporary ‘lock and leave’ homes. Interest from the British is still high and the number of Spanish buyers is on the up, reflecting growing confidence in the market from locals.

The motivation of buyers is also changing from secondary residences to investment, as they take advantage of Spain’s steadily growing property prices and good rental returns. This, combined with Spain’s high quality of life, has assured that the trend of the ‘lifestyle investor’ will continue to grow.

As well as a change in nationality and motivation, buyers of new homes are being more demanding about features and amenities in 2019, adds Papis.

“Buyers are looking for secure neighbourhoods with plenty of high class services,” she explains. “The type of product is changing as the expectations of clients becomes higher: they want home automation systems, porterage, a gym, a spa and a heated pool, all of which is now becoming the ‘norm’ in new projects. Energy-efficient and sustainable homes are also very much in demand, which is no doubt part of the reason the Diagonal Port development sold so quickly.”

According to the National Institute of Statistics new homes sales across Spain in the first quarter of 2019 rose by 14% compared to the same period in 2018 and, as a proportion of total sales, they increased from 17.7% to 19.5%. However, this is still a long way from that of the first quarter of 2007, when new homes represented 41% of total sales. In the Community of Madrid, Valencia Province and Barcelona Province new homes sales rose by 34%, 24% and 12% respectively.