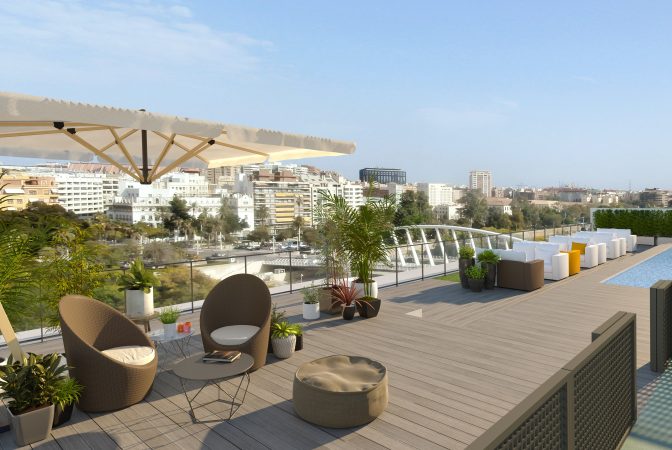 Valencia’s moment under the property spotlight is coming. After property prices and the number of sales transactions more or less halved from the start of the property crisis in Spring 2007 to the beginning of the recovery midway through 2014, Spain’s third city is now showing steady gains and attracting investors looking for good returns.

Property prices continue to be less than half those of Barcelona and Madrid on average, according to Idealista, which shows average prices in Valencia ending the first quarter of 2018 on €1,743 per square metre, in Barcelona €4,334 per square metre and in Madrid €3,540 per square metre. Valencia prices are picking up however – they ended Q1 2018 up €205 compared to the same period in 2016, showing an annual growth rate of 13%. The districts popular with foreign buyers such as Eixample and El Pla de Real saw price rises of 10% and 13% respectively.

Lucas Fox Valencia data also shows that the number of foreign buyers has increased – from 10% in the first four months of 2017 to 33% in the same period this year. The data shows that most Lucas Fox buyers purchase a home in Valencia as a primary residence (58%) with a quarter buying as a second residence and 8% as an investment.

The appeal of the Valencia lifestyle to foreigners is confirmed by recent government figures. The Spanish Registrars Association (Registradores) showed that 10% of total sales completed in Valencia in 2017 were made by foreigners, above that of both Madrid (6%) and Barcelona (9%).

“Valencia has all the amenities and services you would expect from Spain’s third city but its manageable size appeals to foreign buyers, as do the beaches to the north-east of the city where the mix of apartments and townhouses with communal pools and play areas make them popular with families,” explains Juan Luis Herrero, Partner of Lucas Fox Valencia. “For those familiar with the city and its recent development, the current buzz surrounding it comes as no surprise. It is now a growing hub for business and innovation and for many years the city is home to leading companies such as Ford, BP, Mercadona, Caixabank, Air Nostrum and Consum. Communications with the rest of the country and the EU are excellent – you can arrive in the centre of Madrid in less than an hour and a half on the AVE whilst recent data shows that Valencia airport arrivals are up by 19% in the year to April 2018 with Italians, Germans and the British making up the biggest proportion. It will only be a matter of time until Valencia becomes as internationally known as Barcelona and Madrid.”

A significant sign that the property recovery in Valencia is well underway is the growing numbers  of cranes once again hovering over the city. New homes are now in constant demand with Valencia seeing a 5% rise in the number of sales in 2017 compared to 2016 (INE). One such project is Jardines de la Ciudadela, 3 and 4-bedroom apartments currently for sale with Lucas Fox. The  building is situated next to the Turia Gardens, the parkland famous for its futurist museums on the old site of Valencia’s Turia River.

“The property recovery has been slower in Valencia than in Barcelona and Madrid,” adds Juan Lluis Herrero. “But with increasing demand and supply for new homes we expect to see a noticeable change in the pace of the market over the next few years. Modern homes such as Jardines de la Ciudadela not only make an ideal primary or secondary residence but also a great long-term and rental investment. Some of these homes could attract a yield of between 5% and 6%.”

Lucas Fox Valencia opened in 2014 with just 3 people and in less than four years the regional office has grown to incorporate a team of 24 in two offices in the city centre and a third in the beach area of Patacona.

View properties for sale in Valencia on the Lucas Fox website