Madrid’s growing status as a major European investment capital has been given a further boost with the release of new figures from leading real estate agency Lucas Fox. The company, which specialises in the high-end market, has announced a 92% jump in the number of sales transactions and a 311% increase in sales value in the Spanish capital during 2017. The average price of a property sold by Lucas Fox Madrid was €1.4 million, more than double that of the average sales price in 2016.

60% of Lucas Fox Madrid sales were to foreigners in 2017, with Latin Americans accounting for just under half of all international sales.  The other foreign sales were split among French, British, Scandinavian, Australian and Middle Eastern buyers.

According to the property portal Idealista, prices in Madrid grew by 12% in 2017. Prices in the city centre increased by 22% whilst in the desirable districts of Chamberí and Salamanca, prices increased by 19% during 2017. According to property-focused business school El Instituto de Práctica Empresarial (EPE), the trend looks set to continue in 2018, with prices predicted to rise by 11%.

“Madrid is where it’s at right now. The buzz around the city in the last 12 months is palpable. Each week we are seeing exciting new constructions pop up across the city, whether it be an edgy real estate project or a state-of-the-art food mall, Madrid seems to have its finger on the pulse. The city generates almost 20% of the country’s GDP – this impressive growth rate coupled with its competitive tax rates has made the Spanish capital an extremely attractive destination for property investors looking for new opportunities, particularly in districts which had stagnated in the crisis and are now regenerating.”

Among the new projects and initiatives planned in Madrid over the next few years are the creation of a fifth tower in the business district of Chamartín, which will house the IE business school among other major companies, the construction of a Four Seasons hotel in the central district of Sol as well as the pedestrianisation of the surrounding streets. The area surrounding the Bernabéu Stadium is also getting a facelift and along with it, the creation of a new luxury hotel within the stadium itself. For those concerned about Madrid’s distance to a beach, Europe’s largest artificial beach and watersports arena will be ready in 3 years and will be just half an hour drive from the Spanish capital.

British-born Cheryn-Ann Chew bought an apartment via Lucas Fox in the desirable district of Justicia last year, which she now rents out without any problem.  She says that she chose to buy a home in the city as a lifestyle investment.

“Madrid is a beautiful city which is full of life and I wanted to be right in the centre which is why I bought a property in the heart of the action. I love Madrid’s people, the food, the beautiful buildings and the sunshine. Who knows, maybe one day I will find myself living there!”

Sales of new homes for Lucas Fox Madrid accounted for 50% of all sales in 2017, a figure which could further increase during 2018 as more projects come onto the market, including the commercialisation of GMC19, high-end homes in the desirable Alamgro district. 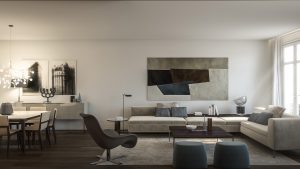 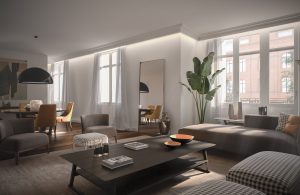 Lucas Fox Madrid has expanded rapidly over the last two years, more than doubling the size of its team at its headquarters in Justicia. The team will further grow in 2018 with new openings in the sought-after districts of La Morelaja and Pozuelo.