Leading independent real estate agency Lucas Fox’s half-year Market Reports continue to show encouraging trends for the Spanish residential property sector. The reports show significant increases in both the number and value of sales transactions for the first six months of 2017 – up by 47% and 55% respectively across all its regions. There has also been an increase in the number of national buyers compared to the same period in 2016, comprising 38% of all sales. 10% of sales were to British buyers – slightly down on 2016 – and 10% were to US or Canadian buyers.

“We’ve had an extremely successful first half to 2017, particularly in Spain’s top three cities, Madrid, Barcelona and Valencia, as well as along the Barcelona coast. Spain’s economy is the fastest growing in the Eurozone, bringing with it greater confidence back the property market. We have seen greater interest from property investors in the last year or so, who now regard Spanish real estate as offering excellent potential for capital gains as well as good profitability through short and long-term rentals. We expect that the price recovery now taking place in Madrid, Barcelona and desirable second home destinations will extend to the suburbs and other parts of the country in the forthcoming months.” 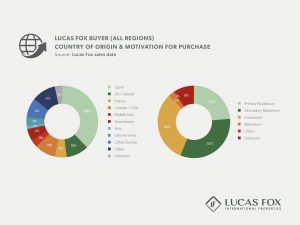 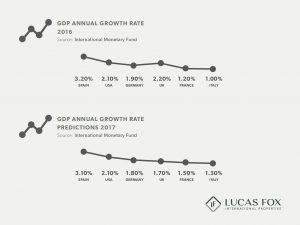 Regional highlights for Q1 and Q2 2017 include:

“Renovated apartments located in Modernista buildings situated in Eixample are as always in high demand, although other areas in the Old Town are becoming more and more sought-after. Driving this demand is the development of luxury new build projects and the transformation of these areas with the opening of new trendy bars, restaurants and shops. Barcelona is also attracting increasing numbers of wealthy international people wishing to settle in the city thanks to its exceptional quality of life. The number of transactions at the top end of the market has grown consistently during the year and prime properties in the uptown area near international schools are being snapped up.”

“2017 has proved to be a pivotal point in the recovery of the real estate market in the Maresme region. The second quarter of the year in particular has seen buyer confidence rise to levels not seen for many years and Lucas Fox Maresme is expecting to register a record-breaking volume of transactions in 2017. The last few months have seen a complete turnaround in market conditions with a high level of activity from both local and international buyers.”

“Prices in Sitges have increased over recent years but are still significantly behind the peak of 2007. Where property prices in Barcelona are fast catching up with those of 10 years ago, here the pace is slower, offering good opportunities for investors who want to see healthy returns.”

“More and more international buyers are choosing the Spanish capital as the best option in which to invest their money, thanks to good potential for capital gains in the mid to long-term, excellent rental returns and the superb lifestyle on offer. The most sought-after locations in the city continue to be the neighbourhoods of Salamanca, Chamberí and Justicia. There remains a shortage of quality properties available on the market in these key central locations of the city but we expect the availability of turnkey homes to increase during the second half of the year.”

“We have seen a noticeable growth in the number of national enquiries in the first half of 2017 and around 50% of our clients are international.  There have also been more investors around, thanks to the city’s attractive property prices, good rental yields and, of course, Valencia’s fantastic quality of life.”

“Demand for coastal properties has remained consistent and there have also been signs of an increase in sales at the prime end of the market. The southern coastal areas of Blanes, Lloret de Mar and Tossa de Mar have also begun to see the return of interest from high-end Russian, Ukranian and Kazakh clients. Both national and international buyers are returning in numbers to the rustic market and the demand for both rustic townhouses in prime areas of the Empordà and larger country houses throughout the Empordà and elsewhere in Girona has risen significantly. This is perhaps the standout trend in the first half of 2017.”