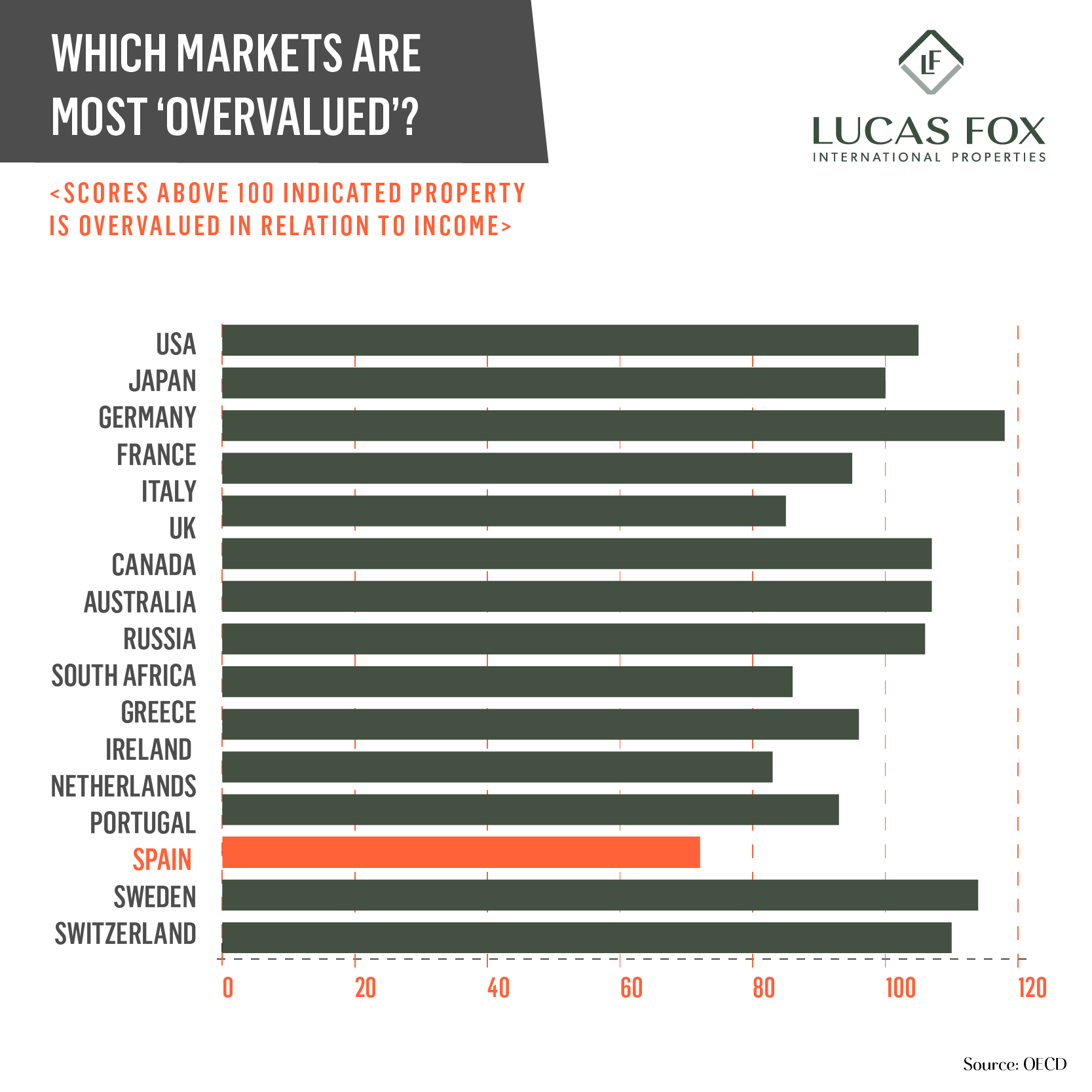 Recent analysis following the introduction of higher Stamp Duty in the United Kingdom points to greater value than ever before in Southern European property markets.

Decade-long research by the OECD plots local property prices against the average wage, taking into account the long-term value. This method has determined that Spain is among the most undervalued housing markets in the world. According to the research Spanish property is undervalued by 26%, and is now showing some of the strongest rates of growth – an exciting time to invest in Spain! 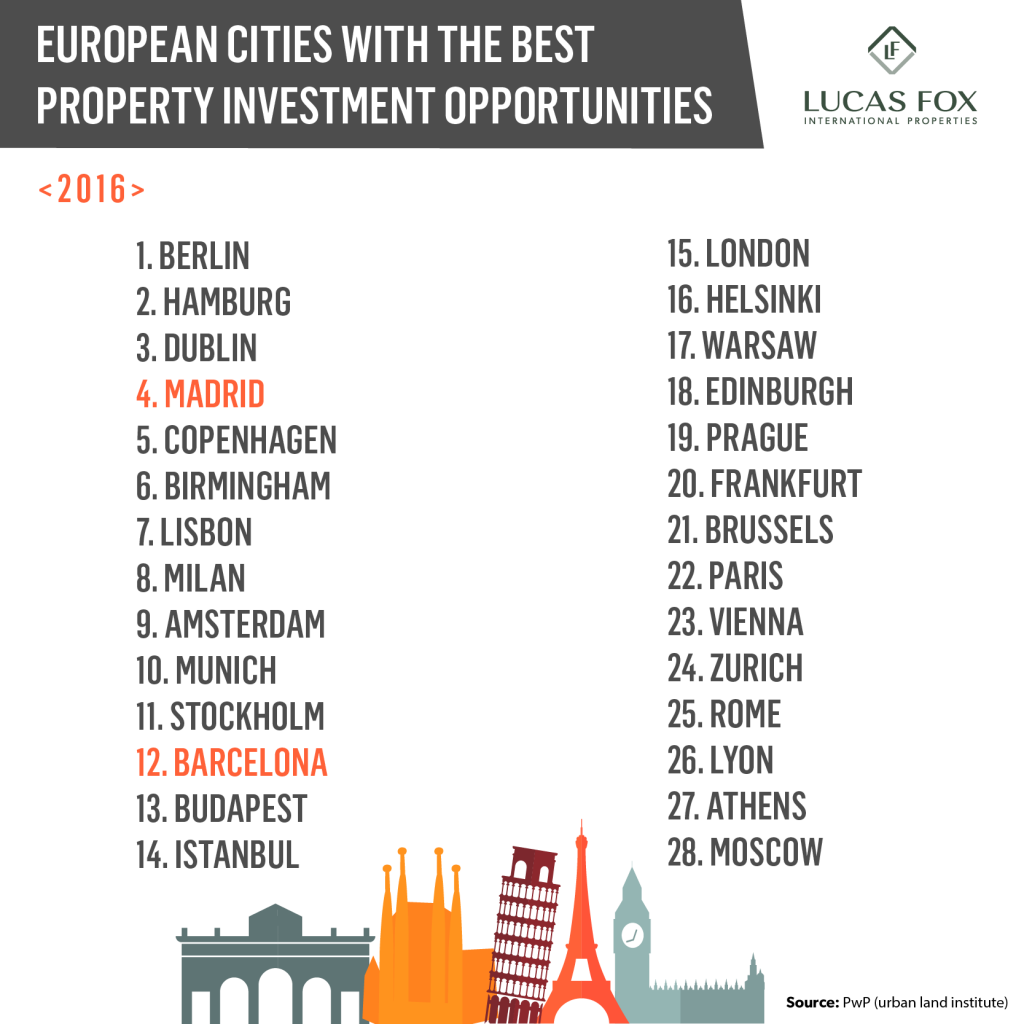 Britain’s capital is no longer in the top 10 best cities in Europe for investing in property, according to a real estate report by PwC and the Urban Land Institute. London has dropped out of the top 10 best European cities for property investment prospects for the first time since 2012, and now sits in 15th place.

The comprehensive report provides a useful guide as to the ways experts predict the market may be shifting and is the result of collating interviews with over 500 investors, developers and property managers throughout Europe. Participants were asked to rate each city based on their investment potential and their impressions on the future of both the residential and commercial property market.

A combination of high prices and a drop in yields saw London squeezed out of the top 10, in which Berlin and Hamburg currently lead. Great news for Spanish property investors, as the list sees Madrid rise to 4th place, with Barcelona not far behind in 12th. Both Spanish cities are predicted to offer extremely favourable investment conditions in 2016.

On Tuesday, Spain’s labour ministry announced that in 2015, Spanish unemployment has fallen by almost 8% from the figures at the end of the previous year.

The nation’s number of jobseekers dropped by 354,203 (the largest decline in history), currently standing at 4.04 million people. Though the labour ministry does not release an official unemployment figure, INE (the national statistics offer) published a rate of 20.18% in Q3. Key improvements can be seen in both the services and agriculture and fisheries sectors, with a decrease in joblessness by 2.22% and 1.09% respectively – a promising start to 2016 indeed!

On Wednesday 13th January, newly-elected lawmakers took their seats in the very first session of Spain’s parliament, following an inconclusive election on the 20th December that has left the formation of the next government still undecided.

Within weeks or even days of the opening session, King Felipe VI will meet with party leaders to assess who is in the best position to form a strong government.

The governing conservative Popular Party won 123 seats, but lacks a majority in the 350-member chamber. The leading opposition Socialists won 90 seats, followed by the far-left Podemos party and its allies with 69, and centrist Ciudadanos with 40. The remaining 28 seats went to six smaller parties.

In other news, in Catalunya’s parliament, former leader Artur Mas has been replaced by fellow party member and Mayor of Girona, Carles Puigdemont.

In 2015, property prices in Spain rose across each of the country’s seventeen regions, in the highest growth seen since pre-crisis statistics in 2007.

At the end of September last year, house prices had increased by 4.5% nationally (compared with the same period in 2014) – having increased throughout six consecutive quarters.

Showing further signs of recovery in the sector, newly built property sales grew by 4.3% according to the central statistics unit, with second-hand property sales increasing by 4.5%. With price increases nationwide, the most noteworthy regions demonstrating growth were the Balearic islands, with an increase of 8.4%, Madrid, where prices increased by 6.9% and Catalunya, with 6.1%.

This promising trend looks set to continue in the year to come, leaving experts hopeful for Spain’s property market in 2016.

The global heavyweight Amazon group recently signed a 30 million euro contract with the Catalan Land Institute over a 150,000m2 plot in the Mas Blau business park in El Prat de Llobregat, close to the city’s international airport. Part of the landmark Barcelona Catalonia business initiative, Amazon will construct over 210,000m2 of space earmarked for warehouses, logistics and offices on a scale never before seen in the region.

The facility will create 2000 new jobs and is set to become a new base serving Spain and Southern France (and eventually the rest of Europe). The centre is expected to open in time to handle orders for Christmas 2016, consolidating Barcelona and Catalonia as Southern Europe’s hub of innovation.

2015 saw tremendous increase in number of visitors to Spain

According to the latest figures published by the central statistics unit, Spain welcomed 3.7 million foreign visitors during November 2015 alone, an increase of 10.7% from November last year.

In 2015, Spain experienced a spectacular year for tourism with the number of visitors increasing by almost as much as 5% year-on-year. From January to the end of November  2015, a total of 64.6 million people visited Spain, an increase of 3 million additional visitors (or an increase of 4.8%). Driving factors cited include the strong Pound to Euro exchange rate, as well as escalated conflicts in nearby countries.

The largest overseas market for the tourism sector in Spain remains the United Kingdom, representing 20.7% of all visitors in November (demonstrating a 12.6% year-on-year increase). The second largest contingent of visitors (representing 16.2%) was France, with just under a third of French visitors heading for Catalunya, whilst the Balearics proved most popular among German visitors (representing 65% of all foreign visitors and 13.2% of the national total).

Catalunya welcomed 16.52 million visitors from January to November 2015, the Balearics attracted 11.55 million and the Canary islands a total of 10.57 million, all signifying substantial increases on the same period the year before.

The biggest increase of Spain’s autonomous regions was Madrid, experiencing 13% growth in the tourism sector. This was followed by Andalucia, where popular tourist hotspots Puerto Banus and Marbella attracted a 9% increase in visitors.

It has been announced that Spanish doctors believe that they have found a proven cure to HIV, the virus affecting an estimated 34 million people across the globe.

The Barcelona-based doctors cured a 37 year old man of the condition using a breakthrough treatment of blood transplants from individuals with an inherent genetic resistance to the virus.   Having proven the procedure successful with this initial patient, he unfortunately developed lymphoma and passed away just three years later.

However according to the Spanish news source El Mundo, the Barcelona-based medical team remains hugely encouraged by what it considers to be a breakthrough in the fight against HIV and related conditions.

Great news for expats in Spain – the popular practise of dubbing foreign films and television programmes is set to become a thing of the past, as Mariano Rajoy’s party seeks to end the country’s policy of employing voice-overs as opposed to subtitling original content.

The tradition of dubbing was introduced by Franco, giving his regime control over content of any foreign media – and can prove something of a nuisance to those used to the film’s original soundtrack and voices. Spain currently ranks relatively poorly on the “English proficiency index (19th of 27 European nations listed). The PP’s move towards showcasing more subtitled foreign films is hopefully set to improve this statistic, through exposure to a wider range of Anglophone media.

The world’s first training programme for personal assistants to high net worth clients is set to open in Barcelona. The “lifestyle institute” is expected to open within two years and will train staff to meet the needs of wealthy tourists visiting Barcelona. The pioneering training institute is an initiative of Lucas Fox partnersAlberta LaGroup, one of the companies currently sourcing concierges in the city for high-end employers, and will offer mentoring in lifestyle management skills.