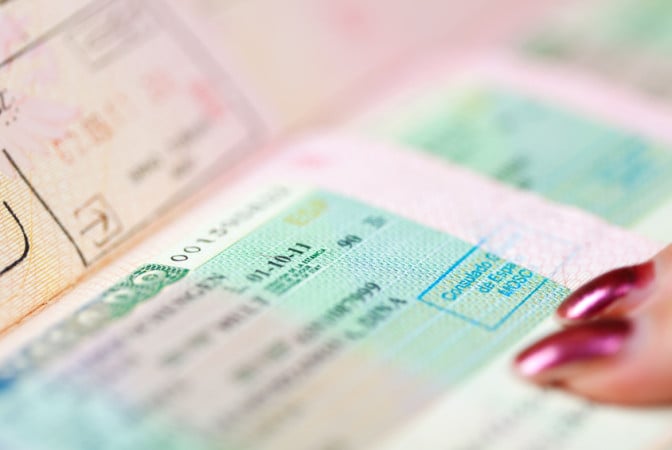 In recent years there has been growing demand from non-EU nationals for residency in European countries in exchange for real estate investment. European nations have responded by introducing a series of so-called “Golden Visa” schemes, offering residency in exchange for property purchases with rules and regulations varying from country to country. The Golden Visas are designed to attract foreign investment and stimulate the post-crisis property market and economy and, overall, most schemes have been deemed a success.

The schemes primarily target Russian, Middle Eastern and Chinese investors, with interest also from the US, India and Latin America. Applicants in all of the countries offering these types of programmes qualify to bring their spouses and any dependent children with them (and in some countries, parents and grandchildren qualify for residency by default).

The amount of money applicants are required to invest varies, as does the length of the visa. However non-EU nationals who are able to make a significant investment will be eligible for a temporary residency visa, which may lead to eventual citizenship. A residency visa enables free travel throughout all 26 countries in the Schengen Area (Austria, Belgium, Czech Republic, Denmark, Estonia, Finland, France, Germany, Greece, Hungary, Iceland, Italy, Latvia, Liechtenstein, Lithuania, Luxembourg, Malta, Netherlands, Norway, Poland, Portugal, Slovakia, Slovenia, Spain, Sweden and Switzerland) with almost immediate effect.

Other advantages include being able to invest in countries with stable political and economic situations, benefitting from good infrastructure as well as the single currency (stable prices, greater consumer choice, integrated financial markets etc).

When? Spain’s Golden Visa scheme was launched in September 2013 and underwent some key updates in 2015.

How Much? The Spanish Golden Visa has a minimum qualifying investment of €500,000 (without finance) in property.

Visa Details? Successful applicants initially receive a 1-year Golden Visa which can be converted into a Residency Permit. The Residency Permit has an initial duration of 2 years and is renewable for periods of 5 years as long as the investment is maintained.

After 5 years recipients may apply for permanent residency, which will require them to live in Spain for at least 183 days per year.

Applicants may apply for citizenship following 10 years of continued effective residence in Spain (more than 183 days per year for the full 10-year period).

Requirements? Applicants will need to be in a position to pay €500,000 or more, without finance, on Spanish property or land. There is no requirement for minimum stays to renew the visa. This means that it is optional to stay in Spain.

Who? The scheme allows the holder to request family regrouping including their spouse, children aged under 18 and adult dependent relatives carrying out their studies.

Other Ways to Qualify? Applicants may also invest €2 million in Spanish government bonds.

Why Spain is the best option

Buying a property in Spain for residency has become an increasingly popular option since the scheme was founded in 2013. Here’s why: 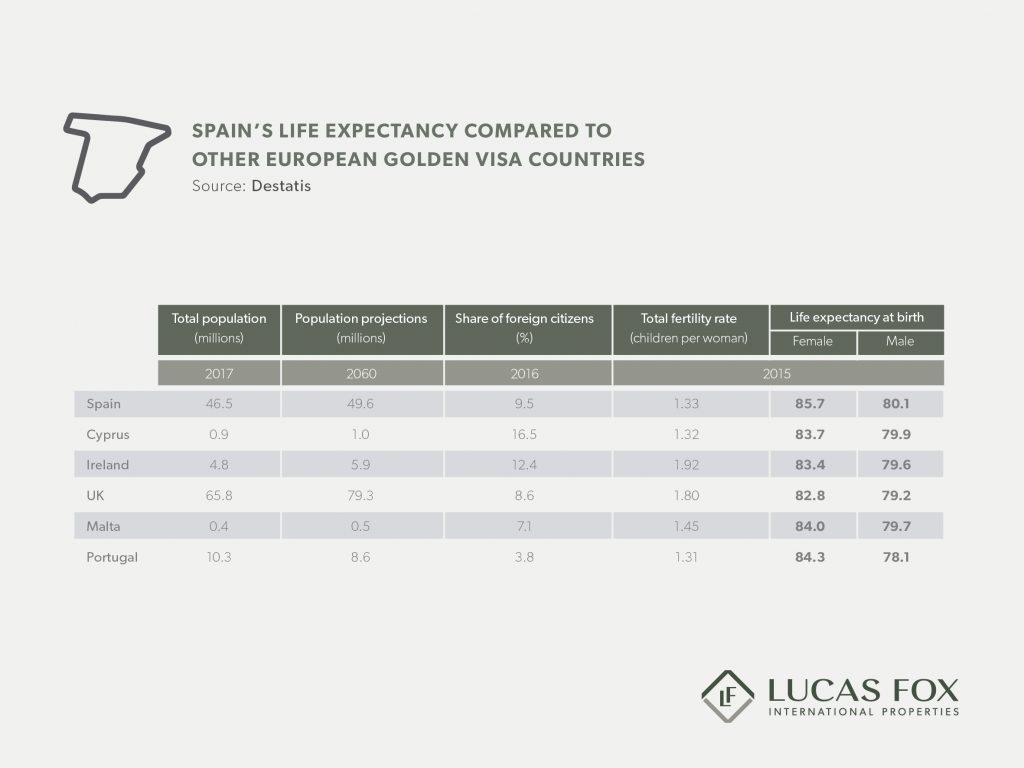 How to get permanent residency in Spain

Lucas Fox offers a bespoke residency service to non-EU buyers. For more information and advice on obtaining the Golden Visa please contact our Residency in Spain office on +34 933 562 989 or via email at info@residencyinspain.com.

Portugal’s scheme is the most similar to Spain’s:

When? The Golden Visa scheme was established in 2012 and was the first of its kind in Europe.

How Much? The Portuguese Golden Visa has a minimum qualifying investment of €500,000 or more in property. For properties older than 30 years or those situated in “urban regeneration zones”, the required investment is €350,000.

Visa Details? The initial temporary residency visa lasts for 1 year and can be renewed twice for 2-year periods at a time. At the end of the sixth year, the holder may apply for full Portuguese nationality.

Requirements? Residency visa holders are required to spend 7 days in Portugal throughout the first 12 months and 14 days per year throughout the following 4-year period. The real estate investment must be kept for a minimum period of 5 years.

Who? The holder may request the family regrouping including their spouse, children aged under 18 and adult dependent relatives carrying out their studies.

Other Ways to Qualify? People who invest €1 million in Portuguese companies or set up a business which creates 10 jobs may also apply to the scheme.

Applicants can now apply after investing a minimum of €350,000 into scientific or technological research activities, or €250,000 into artistic production or the maintenance of national cultural heritage, or alternatively €500,000 into small/medium sized local businesses.

NB: Whilst these new investment categories have been announced, the full regulatory details are yet to be officially published.

When? The United Kingdom have offered their current scheme of residency in exchange for significant investment in the British economy since November 2014.

How Much? The UK’s Golden Visa (also known as the Tier 1 Investor Visa) has a minimum qualifying investment of £2 million.

Visa Details? The initial £2 million investment allows the applicant to reside temporarily in the UK. Following 2 years, applicants may invest a further £10 million in order to settle permanently (or £5 million after 3 years). Applicants may apply for British citizenship after 6 years of residing in the country.

Requirements? Investment in property is not allowed and there are strict guidelines as to which types of investment schemes qualify towards a residency visa application. These include UK government bonds, share capital or loan capital in active and trading UK registered companies.

Who? The investor’s spouse as well as any children under 18.

Other Ways to Qualify? None, unfortunately.

How much? The Golden Visa requires investment of €300,000 in property. In order to qualify for EU citizenship, investors must purchase a luxurious property worth €2 million or invest at least €2.5 million or €5 million into the Cypriot economy (see below for full requirements).

Visa Details? Following this substantial investment, a full Cypriot (EU) citizenship and passport can be processed within just 3 to 4 months.

Requirements? The residency visa is granted within 2 months and covers the whole family. It includes parents of both the main applicant and spouse plus dependent children up to the age of 25. It is valid for life and can be passed down to dependents and spouse.

Who? Passports can be issued to the applicant (the investor), the spouse, all underage children and adult dependents in full-time education under 28 years old.

Other Ways to Qualify? Accelerated citizenship may also be available to those who invest at least €2.5 million in the Cypriot economy, including a €2 million investment in shares or bonds issued by the government, and a €500,000 donation to the country’s Research and Technology Fund.*

*The €2 million figure applies when the individual is investing as part of a larger group of shareholders whose collective investments add up to more than €12.5 million. An investment of €5 million in real estate or banks is still required for an individual.

NB: Whichever of the above criteria they apply under, those seeking citizenship would also need to own a permanent residence in Cyprus worth at least €500,000.

When? The Malta Residence and Visa Programme was launched in 2015.

Visa Details? The applicant (and their dependants) will receive a certificate allowing them to reside indefinitely in Malta. This will be reviewed each year for the first 5 years, then will be reissued every 5 years following this initial period.

Requirements? The applicant must be able to provide evidence of an annual income of at least €100,000 from outside Malta or that they are in possession of a minimum capital of €500,000. Both the applicant and any dependants are responsible for health insurance within the EU territory. The individual must also undergo a health test. Indefinite residency is granted.

Who? Dependants may also join the applicant. This includes the candidate’s spouse, children under 18, children aged between 18 and 26 who are financially dependant on the applicant, a dependant parent and a child aged over 18 who is declared legally disabled.

Other Ways to Qualify? Further measures for applicants have yet to be announced, though it is anticipated that these will take the form of significant investment in government bonds.

The least costly option, unsurprising given recent political instability within Greece and with its wider relationships with EU nations.

When? The Greek version of the Golden Visa scheme opened in July 2013.

How Much? A minimum investment of €250,000 in Greek real estate is required.

Visa Details? Successful applicants will qualify for a 5-year temporary residency visa, which may be extended for a further 5 years at the end of this period. Foreign residents may not be granted citizenship, thus the visa will continue to be renewed every 5 years for the duration of this period.

Requirements? There is no minimum stay requirement.

Who? The wider family of the applicant are included in the visa, including children up to 21 years old.

Other Ways to Qualify? Greece also issues visas to those who make “strategic investments” (the minimum requirement is unspecified and residency is awarded on a pro rata bases) and/or create or buy a business that employs a minimum of 10 people.